Anyone with children will tell you that feeding the family nutritious and tasty meals on a budget is a top priority. This charred corn chowder makes a large enough quantity to feed a large family for dinner or provide multiple meals for smaller families. I love making a big pot of soup at the beginning of the week and having leftovers for a few days and there’s something so comforting about this chowder in particular. It’s creamy from the potatoes, bitter and sweet from the charred corn, and spicy and smoky from chipotle.

To start off, wash and roughly chop the celery, carrot, onion, potatoes and set the frozen corn out to defrost. Since you are going to be using an immersion blender later, you can leave the chunks fairly large. Next, you take a large soup pot and place it over medium-high heat. Once the bottom of your pot heats up, add some olive oil and then dump in the celery, carrot, and onion.

After your vegetables start to carmelize add in your whole garlic cloves. Once the garlic becomes fragrant you can add in the creamed corn, chipotles in adobo, potatoes, and chicken broth. Cover the pot and bring to a boil, then reduce the heat to simmer.

A little side note

Canned chipotle in adobo is something everyone should always have on hand in the pantry. They keep forever and can spice anything up from soup to sandwiches.

Once the chowder is at a simmer you can now focus on the charred corn. For this recipe, I used frozen corn and then cooked it over high heat in a frying pan with a little olive oil. Certainly though, if it’s late in the summer and you have fresh corn on the cob available, you can char the cobs right on the grill.

Take a large frying pan or skillet and place it on the stovetop at high heat. Throw your defrosted corn into the skillet with some oil or butter. Once the corn starts to carmelize, add the taco seasoning and continue to cook. When the corn is sufficiently charred to your liking, take it off the stovetop and set it aside.

Now that you’ve charred the corn, the chowder is about ready for the stand mixer or immersion blender. Remove the pot from the heat and add in heavy cream and milk. Personally, I’d recommend the immersion blender, but if you don’t have one, you can carefully portion the soup out and blend it in batches. You want to blend the chowder until you’ve got a semi-smooth and silky texture. Now take the charred corn you’ve set aside and stir in with the rest of the soup.

Items you may need

Check out these recipes for more chipotle flavors 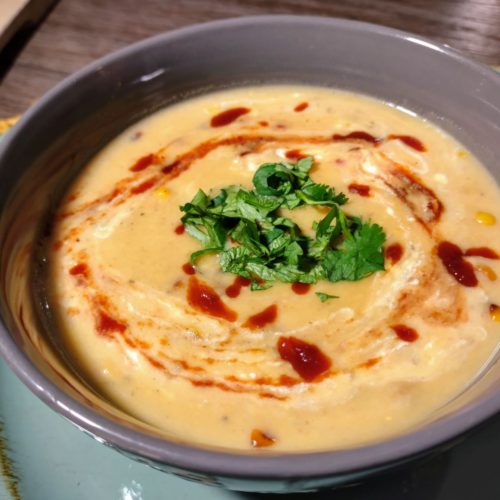 This is a silky corn chowder with smoky-sweet flavors.