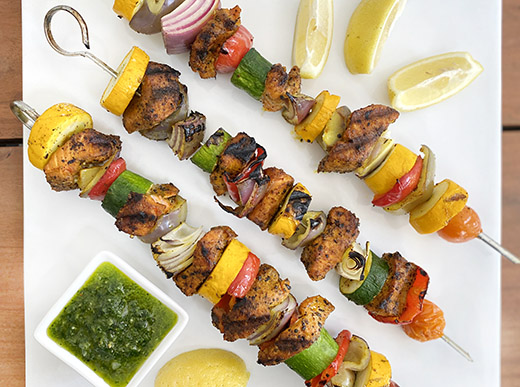 Like everybody, I’m a big fan of all the books from Yotam Ottolenghi and Sami Tamimi. So naturally, I was excited to read the latest from Sami Tamimi and Tara Wigley which is Falastin: A Cookbook

, and I received a review copy. This is a collection of recipes and stories about Palestinian food and culture. Some dishes are classics, some are reconsidered classics, and they all sound like something I want to cook. At the start of the book, I learned that there is no “P” in the Arabic language. Falastin refers to the Palestinian people, the land, the culture, and more. The authors’ goal with this book was to “strike a balance between telling it like it is in Palestine and conveying the upbeat spirit and ambition of the people.” The stories of cooks, farmers, producers, and restaurants that appear among the recipes achieve that goal well. And, the recipes move from breakfast to every course of a meal with one delicious idea after the next. This is straightforward, home-cooking that’s easy and craveable. I stop every time I flip by the photo of the labneh balls rolled in herbs, chile flakes, and za’atar. I have to make those soon. I might even attempt a vegan yogurt version. There’s a chapter for Veggie Sides and Salads, and I don’t know why I’ve marked pages because I want to make everything here. Every single thing. The Roasted Cauliflower and Charred Eggplant with Tomato Sauce; Spiced Chickpeas with lots of herbs and green onion; and Bulgur, Tomato, and Eggplant Pilaf are a few examples. Ordinarily, a Soups chapter may or may not interest me much, but although it’s a small chapter here, it stopped me in my tracks. Butternut Squash and Saffron Soup with Caramelized Pistachios and Herb Oil and Chard, Lentil, and Preserved Lemon Soup with crispy onions are just two options I can’t wait to try. Also, the Sumac Onion and Herb Oil Buns and Za’atar Bread are on my list. The chicken dishes all look delicious, and I’m imagining ways of making the various meatballs and stuffed vegetables with either ground poultry or a mushroom and bean mixture instead of the lamb and beef. I really do want to make everything. That definitely applies to the Fish chapter as well. Fish Kofta with Yogurt, Sumac, and Chile; Roasted Cod with a Cilantro Crust; and Prawn and Tomato Stew with a Cilantro Pesto are all competing for what I’ll cook next. First though, I fired up the grill for Spiced Salmon Skewers with Parsley Oil.


The head note mentions that these skewers are “a winner with all when served,” and I whole-heartedly agree with that assessment. They were only served to two of us at my house, but the recipe was definitely a winner. After the fish was cut into chunks, it was tossed with a Fish Spice Mix and olive oil and was left to chill for an hour. That part could be done the day before. The spice mix was made with ground coriander, ground cumin, ground turmeric, and paprika with added sumac and salt and pepper. There’s a suggestion to make more of this spice mix than you need since it works so well on so many things, and you should. I want to marinate all things in this spice mix. Now, I have to admit, I took a couple of liberties with the recipe. The idea was to cook quartered onions in olive oil and cool them before stacking them on skewers with the salmon. Since the salmon cooks quickly, this gives the onion a head start. The assembled skewers were to be cooked on a grill pan. I made the onion chunks a bit smaller, added some summer squash, peppers, and cherry tomatoes to the skewers, and seared them on a hot charcoal grill outside. There’s a great tip for making sure the salmon cooks evenly: if you have some thin pieces from the tail end, fold them in half to make a thicker cube on the skewer. For the parsley oil, parsley, garlic, olive oil and salt and pepper were pureed until smooth. The skewers were served with the parsley oil and lemon wedges on the side. 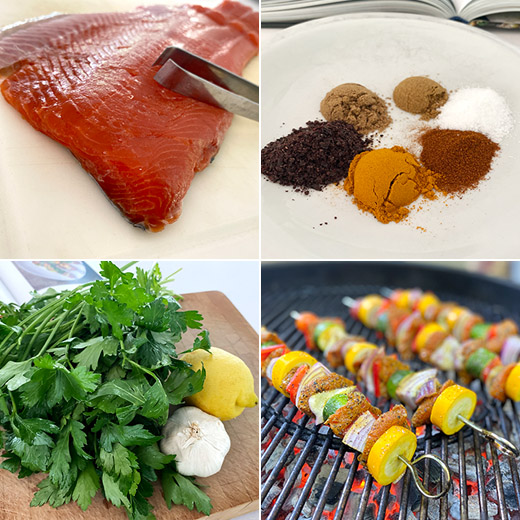 Let me say, this is something I’ll be making often. The flavors from the spice mix and the punchy parsley oil made the salmon and vegetables addictive. I already had a habit of making lots of skewers for the grill, and now I’ll be making even more. I’ve learned more about Palestine from this book–I’m now trying to find Palestinian olive oil so I can taste how delicious it is–and I’m going to be cooking a lot of great food from it as well. 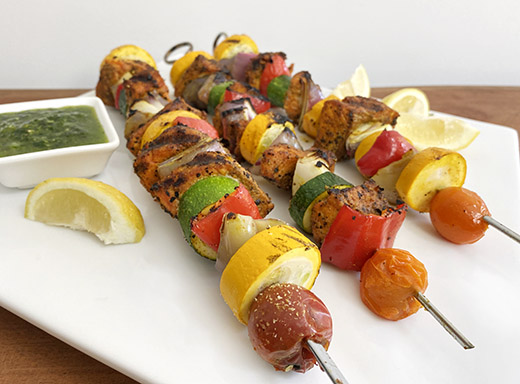