Raspberry Mousse Cakes, Part 1 of 2 – Little House by the Dunes

The Story of Two Glazes

It was the best of times and it was the worst of times. I had a day off, nothing schedule, and time to go deep down the Pinterest rabbit hole.  Time, in fact, to fall in love with mirror glazes and time to put the plan into action. I carried it through and achieved peak shine:

But after all the work it flat-out just didn’t taste good, which is goes against the cooking motto I was raised with: “at least it’ll taste good”. This is something we said in my family whenever anything didn’t turn out looking like we expected. So I went back to the basics, and came up with something that tastes incredible.

This is a multi-part recipe. You could do it all in a day, if you’re at a loose end, or you can do one part each day and end up with a stunning dessert for a nice dinner on the weekend. It’s up to you. This is a recipe for four, but it easily doubles.

Part One: The raspberry mousse and first assembly

Soften the gelatin in the cold water, pour in the hot water and stir until it’s dissolved. Stir in the raspberries.

Put your raspberry gelatin in the fridge. When it starts getting sludgy (beginning to thicken) start on the whipping cream. Pour the cream into a mixing bowl and begin to whip. When it starts to thicken add the sugar and vanilla gradually. Whip until soft peaks form.

Fold in the raspberry gelatin. 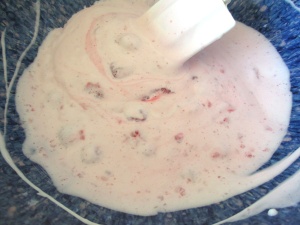 Cover with plastic wrap and return the mousse to the refrigerator to set (about an hour).
Assemble four ramekins. Cut four circles of cake to fit the ramekins. Take those circles and cut them in half horizontally, so you have eight thin disks of cake. Put a disk in the bottom of each ramekin.

Add a layer of mousse nearly to the top of each ramekin.

Top with the second cake layer.

Cover each with plastic wrap and freeze until firm. In our next step we will be unmolding and finishing this dessert by covering them with chocolate mousse and an outer layer of ganache.