A creamy, cheesy side dish that tastes like potato heaven and never goes out of fashion.

It’s creamy, cheesy potato perfection. Potato Bake is the star of any BBQ and tastes even better as leftovers the next day!

It’s a simple dish to prepare, with layers of potato, onion, cheese and cream, though there are quite a few variations.

Here, I’ll run through exactly how I make my Potato Bake – influenced and inspired, as always, by my mum, nan and great Nana Ling.

If there is one thing that makes me excited about eating dinner, it’s when potatoes are involved.

Baked, mashed, boiled, fried as chips… I love potatoes any which way.

But perhaps the most irresistible way to eat potatoes is when they are sliced up and layered with onions, cheese and cream in a potato bake dish.

There are many variations of cheesy Potato Bake, and in other parts of the world similar recipes might be known as potatoes au gratin, funeral potatoes, scalloped potatoes or potatoes dauphinoise.

And back in Nana Ling’s day, s similar recipe was known as Potato and Onion Pie.

Here’s Nana Ling’s recipe for this dish that she sent in to her local paper’s recipe competition in August 1938.

To create Potato Bake that will have everyone raving, start with the right ingredients.

The dish is a little more luxurious these days, and I make Potato Bake with cream and just a little dash of milk.

Here’s exactly what I use with the precise quantities included at the end of the post in the recipe card:

What are the best kinds of potatoes for Potato Bake?

Use fresh potatoes that are more starchy rather than waxy, or an “all-purpose” potato.

You’ll need a medium baking dish to cook Potato Bake. Spray it lightly with oil or grease the dish before you start.

Prepare the potatoes and onion by peeling and then slicing thinly. You can easily do this with a sharp knife, but a mandolin or food processor can also be used to speed up the process.

If you opt to use garlic, also mince or slice that.

Next, pour the milk over the layers and spread out the butter cubes on top.

Cover with foil and bake for 45 minutes.

Uncover and bake for another 45 minutes.

By cooking partly covered and partly uncovered, you should get a lovely creamy potato bake with a top that’s golden but not burnt.

Serve hot and add a few sprigs of thyme or chives to garnish if desired.

Potato Bake will last about 5 days in the fridge, so it’s perfect for making up in advance the day before you’re planning to serve it.

As I mentioned above, there are various recipes for this dish.

While this is my “ultimate potato bake recipe”, here are some nice substitution and variation ideas:

If you love this recipe, you might also like my Potato Cakes or Potato Salad recipe. And you can find other savoury, side and snack recipes here. 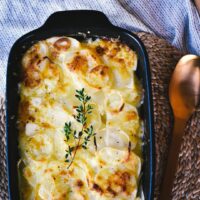