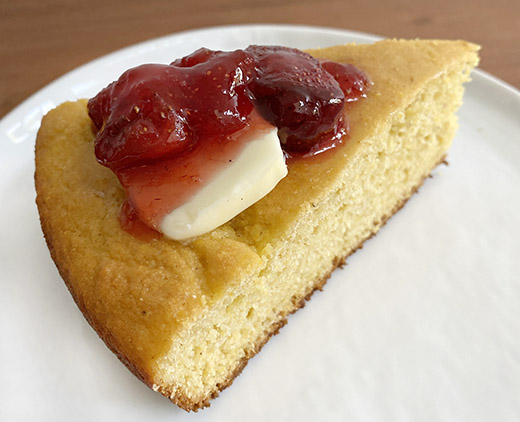 In case there could be any doubt as to the credence of The Good Book of Southern Baking: A Revival of Biscuits, Cakes, and Cornbread

, there are no fewer than seven biscuit recipes. That even includes one dog biscuit. I received a review copy of this new book by Kelly Fields of Willa Jean bakery in New Orleans. This cookbook is written specifically for the home cook and for baking the best versions of several well-loved recipes. It is definitely not a pastry chef’s ego trip. Through anecdotes and asides shared throughout, you get a sense of Fields’ extensive experience and capabilities, but the recipes shared are for straightforward baking in a home kitchen. And, right away, I learned a few game-changer tips while baking from it. Yes, I’m showing you cornbread today, but it’s not just any cornbread. This cornbread involved one of those game-changers. It is hands-down the best cornbread I have ever made. I also have to tell you a bit about the chocolate chip cookie recipe in the book. I was introduced to a type of chocolate I had never encountered before but will now be using often.

For the Willa Jean Chocolate Chip Cookies, Fields experimented with ingredients to arrive at a cookie that’s “chewy, crispy, and crunchy with ample chocolate in every bite.” There are three kinds of chocolate used in the dough: Valrhona Caramelia, Valrhona Dulcey, and Valrhona Guanaja. The Caramelia and Dulcey are both made with pre-caramelized sugars that lend a lovely depth to the sweetness. I wasn’t able to find Dulcey locally, so I used more of the Caramelia and had to work hard not to eat it all out of hand before it went into the cookie dough. I bought feves of both the Caramelia and Guanaja, which are a little big for cookies, and cut them all in half. The cookie dough was mixed, portioned into big rounds, and placed on a baking sheet that went into the freezer. The frozen-solid dough was then sprinkled with flaky salt and baked at a lower oven temperature for a little longer than usual. They were magnificent. And, you can bake just what you need as you need it and have more in the freezer for later. 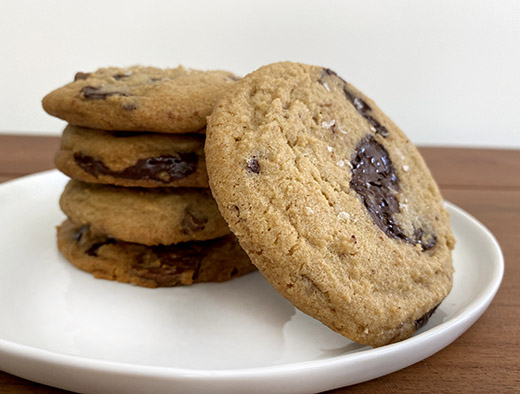 Some other recipes I have my eye on from the book include the Glazed Lemon-Cornmeal Muffins, the Sweet Potato Biscuits, the Moon Pies, and the Spiced Rum Bundt Cake. I should point out there’s a primer on hand pies with several filling options in addition to turnovers. And, thinking ahead to Thanksgiving, I’m already considering the Sweet Potato and Toasted Honey Marshmallow Pie or the Pumpkin Pie with Roasted White Chocolate Cream.

But, back to the cornbread. It’s made with corn flour (not cornstarch but corn flour) and cornmeal. Both are pre-soaked in buttermilk overnight before mixing the batter. The corn flour and cornmeal become fully hydrated and bring about an incredibly tender crumb. Regarding the issue of sugar, I disagree with Fields on this point. She likes her cornbread a bit sweet, and I do not. I omitted the granulated and brown sugars in the recipe and added just a bit of the honey. The cornbread baked in a cast-iron skillet until golden. 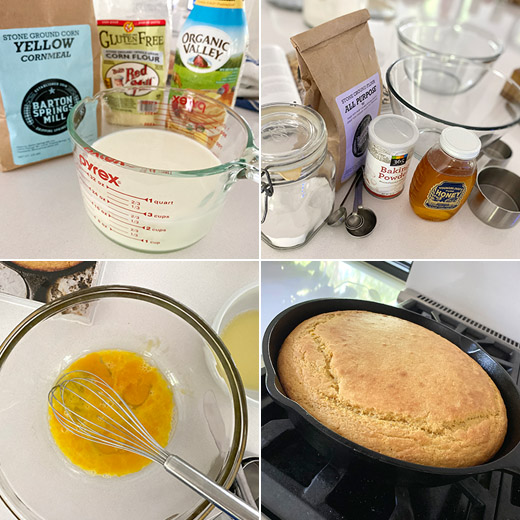 First, the texture of this cornbread is unlike any other I’ve made. It’s crumbly from the cornmeal but tender and not at all dry. It was delicious the day it was baked and the next day and the day after that. It was a treat with a pat of butter and better than some cakes I’ve had with a dollop of jam. It’s clearly a keeper of a recipe, and I look forward to getting just as hooked on others from this book.

This cornbread recipe is a testament to what happens when multiple folks put their heads together and collaborate on a seemingly simple project. The fantastic team at Willa Jean and I dissected cornbread—what we love about it and what we don’t—and became absolutely maniacal about creating a version that spoke to all the different things we imagined the perfect cornbread to be. First and foremost, it’s about achieving great corn flavor. But almost equally important is texture—we hate dry cornbread. This version—the best version ever—blurs the lines between the texture of traditional cornbread and that of a tender quick bread. Then there’s the issue of sweetness, about which there is an ongoing decades-long debate. Some folks believe that cornbread is just cake if you add sugar to it. Folks in the South are real serious about their position on this. I can tell you that I’ve debated it a hundred times over (and often with the same folks over and over again), and I will l stand behind and defend my stance: I like a little sugar in my cornbread. But in truth, I believe there is room in this world for all the cornbreads!

At the end of the day, I think the real jewel is the cornbread that you can and will eat all by itself for breakfast, lunch, or dinner, and that you are equally happy crumbling on top of things like red beans and chili. The trick to this perfect cornbread is letting the cornmeal, corn flour, and buttermilk sit overnight; this allows the corn flour to fully hydrate, while the acid from the buttermilk tenderizes the cornmeal, helping to create a tender, almost cakey bread that still retains that slightly gritty texture you expect. The beauty of this cornbread is that you can leave the fully prepared batter in the refrigerator for 2 days before baking it.

1. In a medium bowl, using a wooden spoon, stir the corn flour and cornmeal with the buttermilk until there are no dry pockets remaining. Cover and refrigerate overnight (or for as little as 1 hour if you want to make the cornbread right now).

2. Preheat the oven to 375°F. Coat a 10-inch cast-iron skillet or 9 by 5-inch loaf pan with the 1 1⁄2 teaspoons butter. In another medium bowl, whisk the all-purpose flour with the baking powder and baking soda. In a large bowl, whisk the granulated sugar and brown sugar with the eggs, honey, and salt. Whisk in the cornmeal mixture until well combined. Add the flour mixture, stirring just until combined, and then stir in 3 tablespoons of the butter.

3. Pour the batter in to the prepared skillet or pan. Bake for about 35 minutes, if using a skillet, or 50 to 55 minutes if using a loaf pan, rotating the skillet or pan after 25 minutes, until the cornbread is golden and irresistible and a knife inserted in the middle comes out clean.

4. Slather with butter and cane syrup, if using, cut, and enjoy immediately. Store leftovers loosely wrapped in foil at room temperature for up to 3 days. 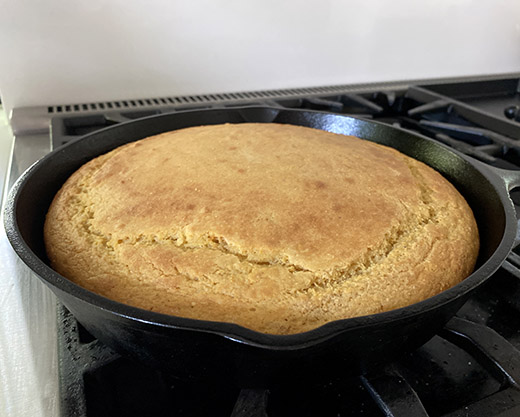