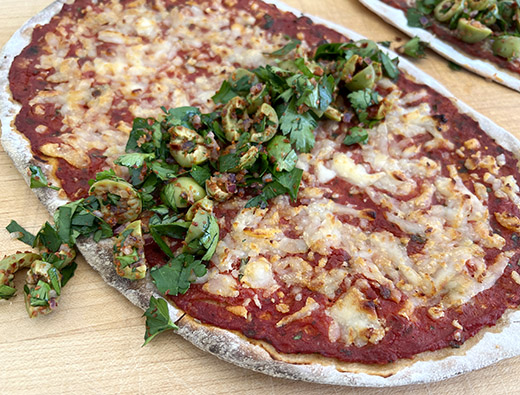 , I think, sums up the lure of French style. It’s defined near the beginning of the book Work Food: Paris of which I received a review copy. It means “having an intelligent approach to enjoying life, greeting each situation with refinement and poise.” The reader is encouraged to “embody this attention to detail” when preparing the dishes in the book for results that are emblematic of Parisian cuisine. That sounds almost strict, but the stories throughout the book actually showcase a very down-to-earth, welcoming style of entertaining and cooking at home. But, the cooking described is done with care and with specific ingredients suited to the time of year. One very casual entertaining option mentioned is the apero dinatoire which involves an offering of charcuterie, cheeses, simple dishes either purchased or quickly made like slow-roasted cherry tomatoes, breads, etc. The classic French dishes and anecdotes with the recipes are splendid. There’s a spinach tart inspired by a grandmother’s recipe made after a trip to a street market for the freshest spinach. Herb-Poached Fish with Beurre Blanc Sauce and pickled shallots is a recipe shared from mother to daughter with coaching via video call. You’ll find Coq au Vin, Steak Frites, and Quiche Lorraine among the well-known French favorites. There are also descriptions of French breads, wines, and cheeses to keep in mind. In the sweets chapter, I was enchanted by the Parisian Black and White Cookies and had to try them. Shortbread dough is made in both vanilla and chocolate. Then, two logs are formed: one with chocolate dough in the center and vanilla wrapped around and a second made the opposite way. Sadly, my dough turned out a bit dry, and I blame the flour that sometimes needs more moisture than it should. I wasn’t happy with the look of my cookies, but the taste was delicious. The Creme Brulee, Ile Flotantes, and Crispy Almond Cookies beckon as well. But, what repeatedly caught my attention as I read through the book were the dishes that aren’t traditionally French. The Tunisian Salad with preserved lemon and harissa, the West African Rice with Fish and Vegetables with chile-marinated and panfried fish, and the Syrian-Style Flatbreads added some interesting flavor twists to the collected recipes here. It was the photo of the flatbread that inspired me to try it.

I’ve read a little about lahmajun, or Syrian flatbread, before. The crust is so thin. In the book, it’s topped with spicy ground lamb. I went a different route and topped mine with grated halloumi, but I used the sauce as written. The dough was just flour, water, and salt. After mixing, it was set aside while making the sauce. The sauce was a mix of grated tomato, minced garlic, minced onion, parsley, cayenne, and cumin. The dough was divided, rolled into ovals that were placed on parchment paper, topped with sauce and grated cheese, then transferred to a pre-heated baking sheet, and placed in a hot oven just until the edges began to brown. The dough should remain foldable and not become crisp throughout. A bright, fresh topping was made from parsley leaves, minced onion, Aleppo pepper, and I added chopped olives. That mixture was spooned on top of the flatbreads before serving. 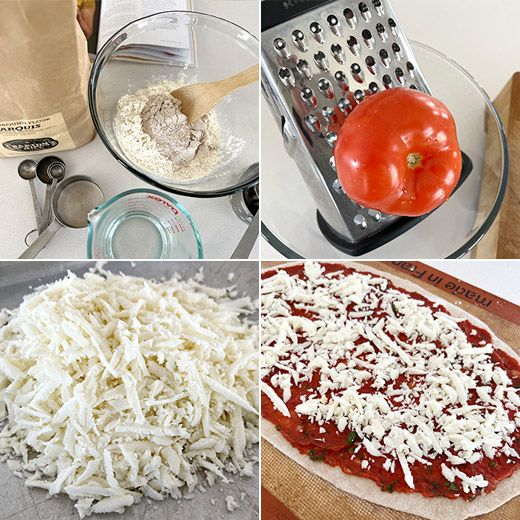 What I learned about this type of flatbread from this recipe is that you should roll it up and eat it like a burrito. That was a fabulous way to enjoy it. Bits of the edges of crust were crunchy, but the center was tender enough to roll. There was a hit of spice from the Aleppo pepper and freshness from the parsley. Now, I just need to experience this while actually in Paris. 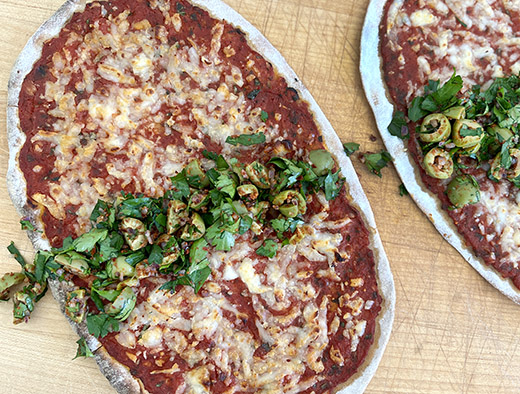