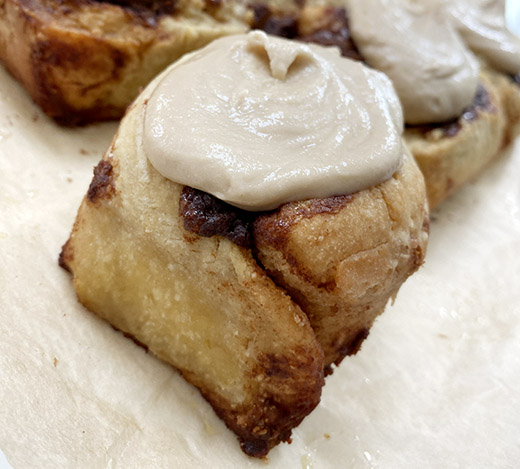 I’ve really liked baking with sourdough since my first attempt years ago. I have a few favorite recipes that I bake often like sourdough bagels, baguettes, and a rye and wheat combo loaf that seems foolproof. I realized that I may have gotten stuck in my habits with sourdough. I’m used to the recipes I’ve made several times, know how the timing will work, and understand when there is flexibility in the scheduling. Dare I say, I’d gotten stuck in a sourdough comfort zone? It was time to try something new, and Modern Sourdough: Sweet and Savoury Recipes from Margot Bakery

, of which I received a review copy, by Michelle Eshkeri was great inspiration. These breads from Margot Bakery in North London are varied in origin but all rely on great flavor from sourdough. The book also includes some cakes, cookies, and bars offered at the bakery that are not made with sourdough, but I was intrigued to find Sourdough Rye Brownies, Fennel and Feta Muffins, and Aubergine Einkorn Galettes all made with sourdough in the recipes. The Margot loaf is a round, country-style loaf with Khorasan and white bread flours, and it rests for a long, slow rise in the refrigerator before baking. There’s also Focaccia, Challah, Simit, Beetroot Bread, and even laminated pastry dough all made with no commercial yeast or other leavening. There’s even a version of Rugelach made with that laminated pastry dough that looks delicious. But, it was the brioche that got my attention. I’ve made brioche several times and in different ways in the past. Most recently, my old mixer broke and I ended making a very rich brioche dough by hand with lots of kneading. I’ve made a sourdough brioche before that was used for hamburger buns, but that recipe included some yeast in the dough. Here, the brioche is definitely rich with eggs and butter, but it was all up to the starter to make it rise. I had to give it a try. I was torn between using the dough for a Babka loaf or Cinnamon Buns. Both are made with the same dough and same filling and I’ll eventually come back to try the Babka, but a cinnamon bun craving had to be addressed first.

The recipe itself was a multi-day process after I had fed my starter for a day to revive it. Stage one just involves feeding a small amount of active starter with the amounts of water and flour listed. Stage two mixes the Stage one starter with more flour and water, and this time a little sugar. Stage three is for mixing the brioche dough with a pause for the autolyse, a long ferment in a warm oven with a bowl of water, and then additional resting in the refrigerator to make the dough easier to handle. Once chilled, the dough was patted into a rectangle and schmeared with a butter, brown sugar, and cinnamon mixture. With every other cinnamon bun recipe I’ve ever made, the dough is always rolled into a log and then sliced into rounds. Here, the dough was cut into strips first and then rolled three strips at a time before being separated into rolls and placed in a baking dish. It prevented the dough from becoming stretched and elongated. Once the rolls were formed, they sat, covered, at room temperature for 16 to 24 hours before baking. At last, the next day, they were baked. I can never resist topping cinnamon buns with cream cheese frosting, and I did that here as well with a coffee-flavored frosting. In the book, a simple syrup is poured over the buns while they’re still warm from the oven for a simpler look. 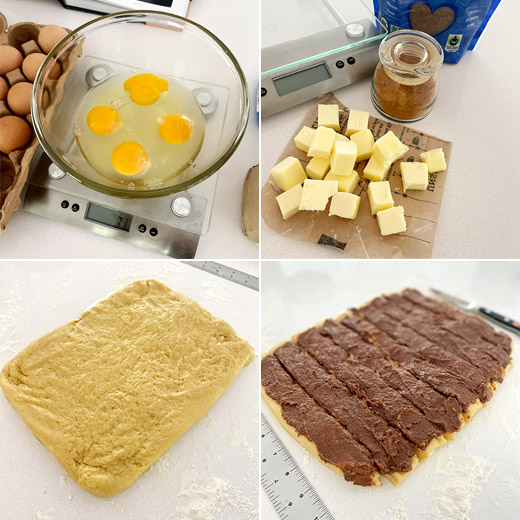 To call these cinnamon buns decadent would be an understatement. They are delightfully rich, and all the waiting time was worth it for the flavor it produced. While I have no complaints about these at all, next time I might reduce the amount of filling since it did escape the rolls a bit. But first, I need to try those brownies and the focaccia and the muffins. 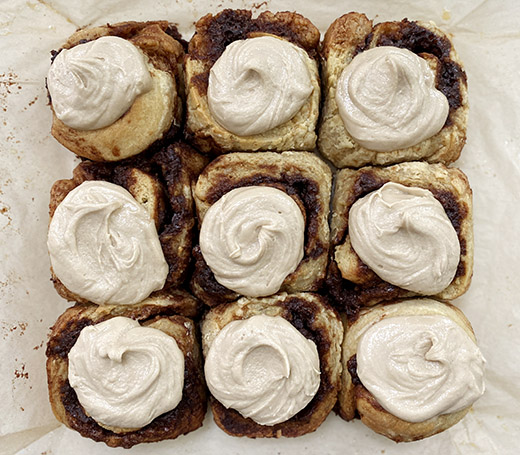