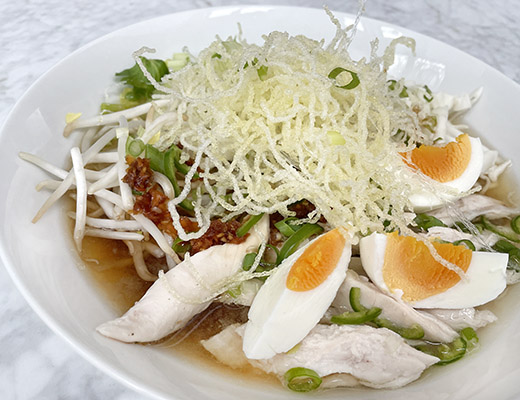 I make a lot of soup. It’s not just a cold weather dish for me. There are so many options and so many seasonal vegetables to use in different soups from one month to the next. And, I love having leftover soup to heat up, unless it’s a chilled soup of course, for lunches throughout the week. So, I thought I knew chicken soup. Turns out, I had no idea how many varieties there really are from every corner of the globe. I got a great education on the topic from The Chicken Soup Manifesto: Recipes From Around the World
by Jenn Louis of which I received a review copy. Louis approached the topic as “a culinary connection shared around the world.” Each take on the humble chicken soup offers unique additions for flavors, starches, thickeners or not, and garnishes. The recipes are presented by country, and the first chapters are soups from African countries. I was immediately caught up by the spices and use of chickpeas in several of these soups like Chorba Bayda from Algeria. The Chicken Mafe from Senegal is a thick, rich soup with eggplant, squash, sweet potato, okra, chiles, and peanut butter. I would like that with or without the star ingredient, chicken. From the Americas, there’s the familiar-to-me Sopa Azteca or tortilla soup and Pozole Rojo and Verde. But, I’ve never made the lighter, lovely, and brothy Sopa de Lima with fresh tomatoes and bell peppers. From the US, I’d never heard of Bott Boi from southeastern Pennsylvania or Chicken and Slicks from the Carolina Appalachian region both of which are takes on chicken and dumplings. There are delicious Asian options, and garnishes are always a selling point for me. Laksa from Indonesia and Keihan from Japan are two prime examples. I learned that Thai Khao Swe, Malaysia’s Laksa, and India’s Kho Suey are all adapted from Burmese Ohn-No Kao Swe. The latter is a coconut milk- and broth-based soup thickened with chickpea flour. There are chicken soups with cream from Belgium, Finland, and Ireland; chicken and tomato soup from Albania; and Avgolemono and Stracciatella from Greece and Italy. I want to try all of them. But, I let my produce be my guide. I had both local cabbage and celery and was intrigued by the Saoto recipe from Suriname that was completely unfamiliar to me.

In the 19th century, Javanese contract workers brought this soup to Surnime, and it’s sometimes called Blauwgrond after the neighborhood where it’s eaten as a late-night snack or meal. I’ve been able to find galangal at grocery stores in the past, but not this time. I used ginger instead. Ginger along with garlic, onion, lemongrass, bay leaf, allspice, and black pepper were simmered in stock with chicken pieces until the chicken was cooked through. An habanero chile was added. When the chicken was cool enough to handle, the meat was pulled into shreds and added back to the soup. Meanwhile, a sambal was made by combining a finely chopped habanero, minced garlic, and soy sauce, and cellophane noodles were briefly fried to crisp them into nests. Garnishes including hard-boiled egg, bean sprouts, shredded cabbage, and thinly sliced celery were prepped. 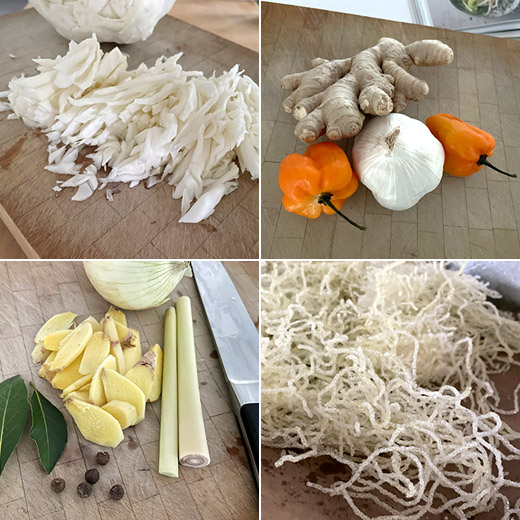 Have I mentioned I love a soup with garnishes? Oh, I have. That might have been another reason I chose this recipe first. Wedges of hard-boiled egg, crunchy noodles, crisp fresh vegetables, and a drizzle of spicy sauce were everything I expected them to be here. I learned last year that frying a scant few noodles to top just about anything is one of the most fun things to do in the kitchen. They crisp in seconds and add so much texture. Learning while eating is also a lot of fun, and I plan to continue my chicken soup education. 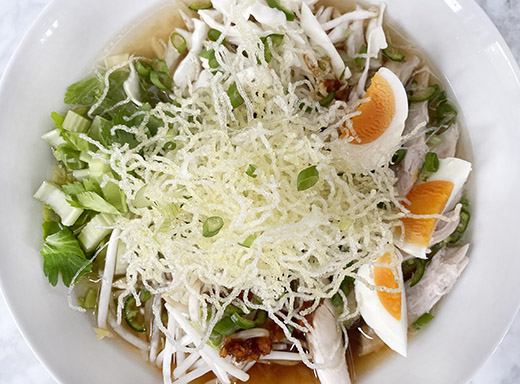