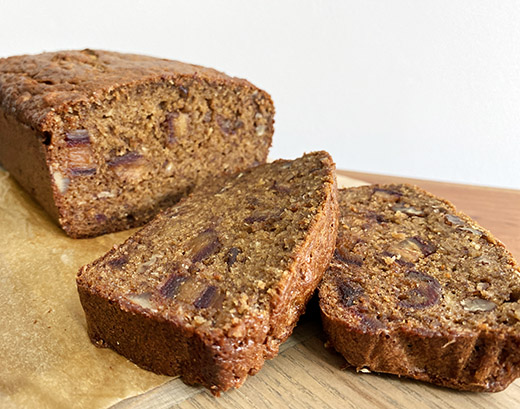 I feel like I’m missing out on some of the quarantine kitchen fads. I already enjoyed baking with sourdough, and I already cooked a lot. So, the newfound popularity of those things isn’t really affecting me. Maybe baking banana bread was an attempt to jump onto a bandwagon, any bandwagon. But, this particular version sounded so good, I had to give it a try. It’s from Toni Tipton-Martin’s new book Jubilee: Recipes from Two Centuries of African American Cooking of which I received a review copy. After the years she spent researching the African American cookbook authors whom she wrote about in The Jemima Code, she next wanted to share a “broadened African American food story.” She writes that this new book “celebrates the enslaved and the free, the working class, the middle class, and the elite. It honors cooking with intentionality and skill, for a purpose and with pleasure.” It reaches beyond stereotypical ideas about soul food or southern food and displays the practiced cooking ability of cooks past and present. Some of the recipes are modern takes on dishes found in historical cookbooks, and those original recipes are included as sidebars for reference. Other dishes are inspired by contemporary chefs and cooks. Tipton-Martin explains the source and her changes for each. There’s a nice focus on hospitality and cooking for friends and family with recipes for everything from appetizers to dessert. The beverages chapter had me craving cocktails with Planter’s Punch with bourbon and Rum Punch. And, although the Calypso Coffee with chocolate and rum is suggested as an after-dinner drink, I’d love it for brunch too. In the breads chapter, I’m fascinated with the Quick Cinnamon Rolls made with a baking powder biscuit-like dough. There are also several versions of cornbread to consider along with muffins, biscuits, and sweet potato bread. Moving through the book, you’ll find gumbos and a crawfish bisque, and a peanut soup that sounds delightfully decadent with butter, cream, peanut butter, and hot sauce. There’s a Sweet Potato Salad with orange-maple dressing and pecans and raisins that sounds light and lovely for a fall meal and an intriguing dish called Beets Etouffee that’s a saute of beet matchsticks with green apple. In the main dishes chapter, the Lamb Curry is a combination of ideas from Alexander Smalls and J.J. Johnson, Marcus Samuelsson, and Dunston Harris. The flavors from green pepper, celery, and garlic plus the spices, rum, and lime sound like a mixture I’d love to try on chicken or tofu or a spoon. There are also several classic desserts. But, I had to flip back to the breads chapter for the Island Banana Bread. It was adapted from a B. Smith recipe and gets great color and flavor from molasses and dates.


Toasted, chopped pecans and pitted and chopped dates were tossed with a little flour and set aside. Next, flour, baking soda, salt, cinnamon, nutmeg, and ginger were whisked together. With a mixer, softened butter, brown sugar, or muscovado as I opted for, were combined until light. Then, eggs were added one at a time. In a third bowl, bananas were mashed with molasses, buttermilk, and vanilla. The flour mixture was mixed into the butter in three additions alternating with the banana mixture. Last, the nuts and dates were folded in. The batter was scraped into a prepared loaf pan and baked for about an hour. 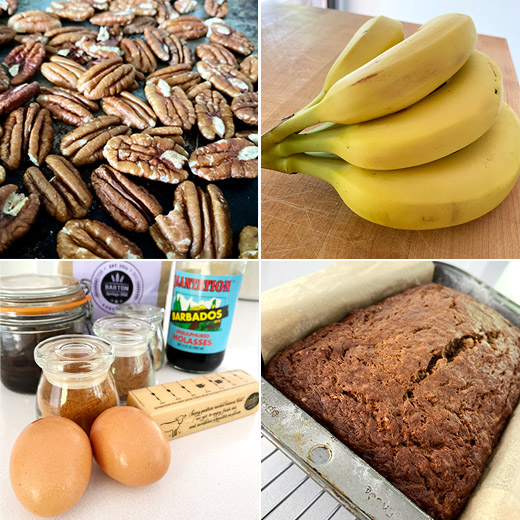 I don’t make banana bread very often, but it’s nice to have it on hand. Toasted slices slathered with butter made some delicious breakfasts while it lasted. And, flavors from the spices, dates, and molasses were lovely here. I’m going to try those Quick Cinnamon Rolls next, and who knows, they just might become the next big baking fad. 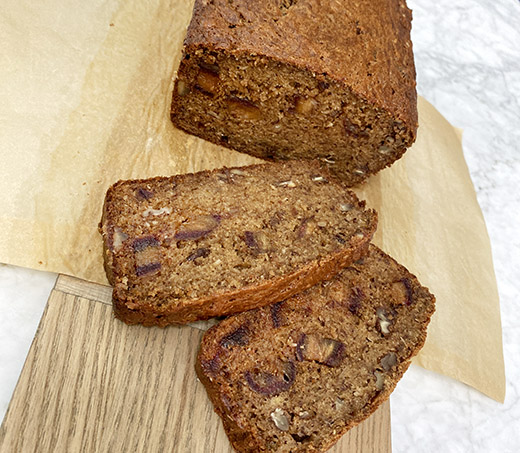