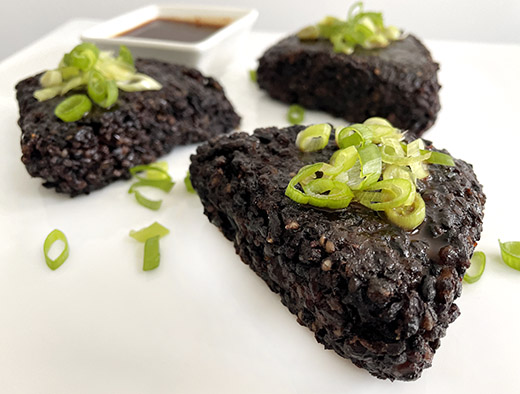 Sometimes a first impression is completely wrong. I admit it. I was wrong. When I took a first glance at Super Natural Simple: Whole-Food, Vegetarian Recipes for Real Life by Heidi Swanson of which I received a review copy, I wasn’t sure I would be very interested. Those first few pages I glimpsed included some very simple ideas like a bean salad made with canned beans and a few other ingredients and packaged root vegetable chips that get warmed in the oven and tossed with oil, green onion, and lemon zest. Maybe I was in the mood to be more challenged that day? As I started reading the book, and I really do read all of my cookbooks, I kept encountering dish after dish that I wanted to make. I think I tried more recipes from this book than any other before its first mention here. The recipes are streamlined, the ingredient lists are mostly pretty short, and there are things I’ll be making repeatedly for years to come. One that I’ve already made a couple of times and wish I had a constant supply of is the Puffed Rice Party Mix made with unsweetened rice cereal, raw peanuts, raw cashews, raw peptias, flaked coconut, crumbled nori, and spices including turmeric. It’s a delicious and nutritious snack mix. The turmeric will stain your fingers as you eat it, but it’s so addictive you won’t mind. Or, you’ll use a spoon. One of the other first recipes I tried was the Lemon-Garlic Pita Chips, and that was as simple as it gets with pita cut into wedges and tossed with olive oil, minced garlic, and lemon zest before being toasted in the oven. Those chips were then cut into shards to garnish the Coconut Asparagus Soup that was thickened with potato and brightened with lemon. The Weeknight Pot Stickers is another dish I’ll return to often. Dumpling wrappers were filled with the Lemony Carrot Salad, from The Best Salads chapter, and crumbled tofu. They were then fried and steamed and served with ponzu and chile oil. I suspect the Som Tum Noodles will also become a regular in my meal rotation. As promised in the head note, they were sweet, sour, salty, and spicy. Rice noodles were cooked with added turmeric in the water and were then tossed with cherry tomatoes, grated carrots, cucumber, chopped kale, herbs, and a spicy lime and soy dressing. And, there are sweets too. I made the Sunflower Brittle because I was intrigued to see a recipe for a brittle with no refined sugar. It’s made with just maple syrup, and it was fantastic. After all those recipes that I’ve already tried and more that are flagged, I then read the Power Pantry chapter. This is where you’ll find basics like sauces, dressings, pickles, broths, and seasoned salt, etc. There are some nutritional powerhouses here like the Omega Seed Spread and the Purple Jasmine Rice, Seeds and Spices. This chapter is where I found the Blackout Beans and Rice recipe and the recommendation to use it in the onigiri found in a previous chapter. I’d never made onigiri before and couldn’t wait to try.

To start, black rice, black beluga lentils, and black sesame seeds were rinsed in a strainer and then transferred to a bowl. Water was added, and the mixture was left in the refrigerator overnight to soak. The next day, the mixture was placed in a saucepan, coconut milk and salt were added, and it was cooked until the liquid had been absorbed and the rice and lentils were cooked through. Once cool enough to handle, the mixture was formed into triangles. And, that’s when I decided I want an onigiri press because I’m definitely going to make this and other versions in the future. In the book, the triangles were grilled and glazed with a harissa-tamari sauce. I went with gochujang instead of harissa, and I griddled out of fear of the triangles breaking and falling through the grill. They were served with a green onion garnish and more glaze. 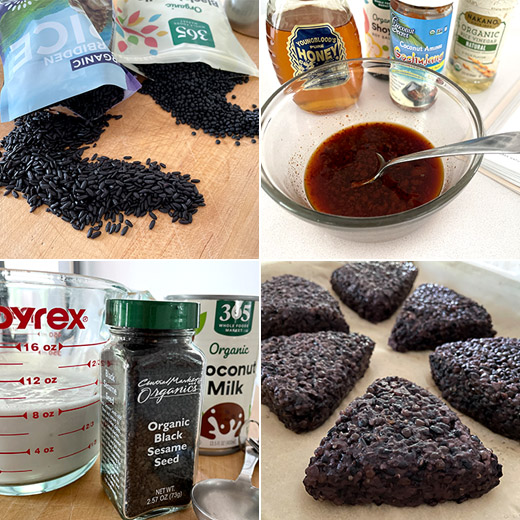 I don’t know why I’d never tried making onigiri before, but I’m so glad I finally did. Forming the rice triangles was fun, and I look forward to trying different variations. The surfaces got a little toasty from the final cooking, and the glaze added a punch of flavor. With so many dishes I’ll be making again and more that I still want to try, this book will be a permanent fixture in my kitchen. 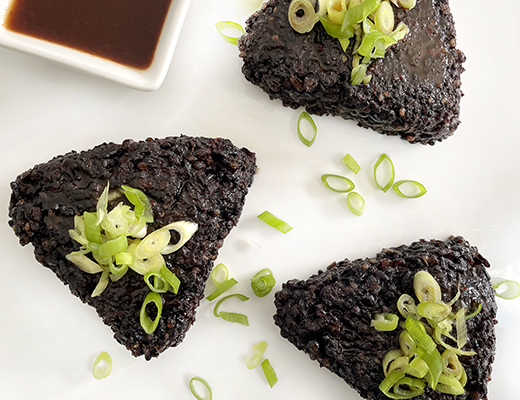