Australia’s favourite kids party food! Is it even a party without Fairy Bread?

Is it even a party without Fairy Bread? Certainly not if you were at an Aussie kids party during the 1980s!

Making Fairy Bread is easy and it takes just three fairly ordinary ingredients – bread, butter and 100s & 1000s/sprinkles – and turns them into something quite magical. Something that might transport you back to your childhood.

It’s the sweet, colourful and nostalgic treat that kids (and many big kids) still love today!

Like Lamingtons and Pavlova, Fairy Bread is something that Australians and New Zealanders like to tussle over sometimes.

But, being an Aussie, I of course say it’s as Aussie as those other great Aussie inventions – the Hills Hoist, Wi-Fi, Vegemite and Damper.

While we don’t know exactly who came up with this magic combination of ingredients, the earliest reference to it appears in a Tasmanian newspaper in 1929.

There are earlier references to Fairy Bread, but these seem to refer to a type of thin, wafer-like bread rather than what we know and love as Fairy Bread.

Whoever invented it, they deserve a big thanks for putting smiles on kids’ faces for nearly 100 years!

By the mid 1930s, Fairy Bread was firmly established as the snack of choice for kids during celebratory events such as birthdays and Christmas time.

The Sydney Morning Herald in 1934 suggests Fairy Bread for Christmas Dinner for toddlers and again the following year for a “Christmas without tears.”

In the 1950s, a Wollongong newspaper reported school kids having “the jolliest time” with a party that included “gay party caps and jaunty little hats for everyone, real party food — ‘fairy bread,’ iced home made cakes, fruit cup and ice cream.” Sounds like a real blast!

By the 1970s and 1980s, a little me was enjoying this treat at parties and well into the 2000s I was making it for my own kids when hosting a party. At my youngest daughter’s 7th birthday, I had to make some emergency backup Fairy Bread after the first large plate if it disappeared so quickly.

To make Fairy Bread that disappears like magic, I believe traditional is best.

I’ve added quantities to the recipe card below, however it’s one of those recipes that are hard to quantify and I suggest you look at the pictures closely if you haven’t made Fairy Bread before and adjust the quantities as necessary.

How to make (perfect) Fairy Bread

Like most recipes, the secret here is to use good quality ingredients and pay attention to the details.

Okay, this is a controversial subject and I must admit to being a traditionalist here.

I do not believe in variations for Fairy Bread.

It’s the perfect little slice of sweetness and nostalgia just as is.

But any time of year, bring out a plate of regular Fairy Bread and it’s a recipe for happiness.

A. Absolutely not. Fresh white bread is the only way to enjoy this treat.

A. Of course! It’s been around for nearly one hundred years! Next question.

Q. Can I make Fairy Bread a day ahead?

A. Nope. It’s definitely something that should be made up just before serving. And it doesn’t take long so there’s really no reason to make it a day ahead.

A. It happens each year on 24 November and is an event to celebrate Fairy Bread, sprinkle kindness and raise funds for ReachOut, Australia’s leading online mental health service.

Q. What other recipes are great for a kids party? 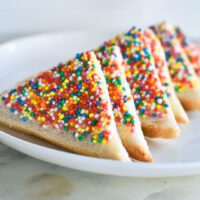