This is one of the easiest pizzas I make and easily one of the tastiest. That’s saying a lot because you all know how much we love homemade pizza around here. 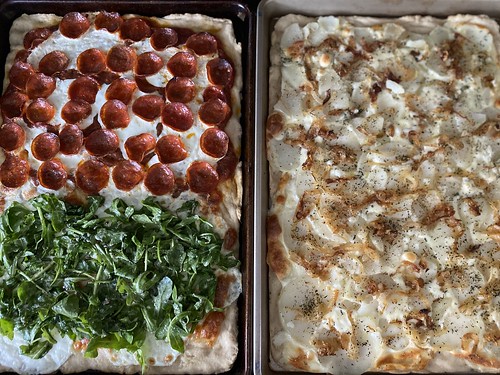 I first saw this pizza over at Dinner: A Love Story. One bite and we all said it tasted just like a pierogi. The soft potatoes, the sharp cheddar, the caramelized onions. Such a great combo.
The first time I made it with only cheddar cheese and it was too greasy for us, so I swapped out half the cheddar for mozzarella. Sometimes I bake the potato slices like I do for my Roasted Potato and Rosemary Pizza but most of the time I just parboil them.

Inspired by Dinner: A Love Story

Heat oil in a large non-stick skillet over medium heat. Add the sliced onions, season with a little salt, and cook for at least
25-30 minutes, allowing them to caramelize.

Add potato slices to a pot of salted water and bring to a boil. Cook for 5 minutes, then drain well.

Lightly grease a standard baking sheet. Place the dough in the middle. Press and stretch it out with your fingers so
it reaches the edges. Drizzle with a bit of olive oil and rub to coat the dough. Cover with both cheeses, leaving a border
around the edges. Put the potatoes on top of the cheese in a single layer, then top with the caramelized onions. Sprinkle with the thyme or rosemary, if using.

Bake for
15 minutes until cheese is bubbly and crust is  golden brown. Remove from the oven and transfer pizza to a cutting board. Slice and serve.